Alex Marquez enjoyed a dominant weekend at the Brno circuit in the Czech Republic as Moto2™ action resumed after the summer break. From his second pole position of the season, the EG 0,0 Marc VDS rider was second away from the line at the start but regained the lead by the third corner and never looked back.

Setting the fastest lap of the race, which marks another new lap record with Triumph 765cc power, he delivered a faultless performance to take his fifth victory of 2019. Meanwhile, his main championship rival Thomas Luthi crashed out on lap four, handing Marquez a healthy 33-point lead – the largest gap there has been during this incredibly close season of racing. Even then, the top seven riders are split by 60 points – half that of the MotoGP™ class.

What’s more, further demonstrating the closeness of the championship, there were two new riders on the Moto2™ podium for the first time this season – Fabio Di Giannantonio and Enea Bastianini.

This means that there have now been 11 riders to stand on the podium during the Triumph Moto2™ era, or an impressive one third of the grid.

Steve Sargent, Triumph’s Chief Product Officer, said: “Congratulations to Alex Marquez and the Marc VDS team for their dominant display in Brno, with consecutive pole positions and race wins! Alex set a new lap record on only his second lap of the race which shows how in tune he is with getting the best from the Triumph Engine. This continues our consistent achievement of breaking records at every race this season. It’s also great to see two new riders Di Giannantonio and Bastianini feature on the podium near the start of their Moto2 journey. As we are supporting the development of the next raft of Moto GP talent, it is a fantastic indication of how close the competition is this year with our engines that one third of the Moto2 grid has achieved a podium place this season.

In a busy August for the championship comprising three races, next up for the Moto2™ series is the Grand Prix of Austria this coming weekend, 11 August. 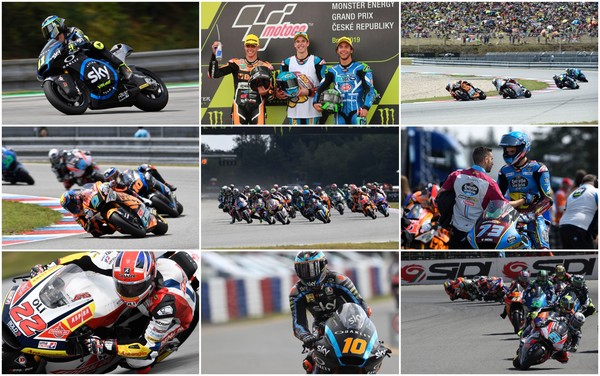