A scorching British Grand Prix got underway this weekend with the global reveal of the all-new Daytona Moto2™ 765 Limited Edition, launched at the home of British motorsport, the exclusive British Racing Drivers’ Club. In addition, moments before the start of the Moto2™ race, former middleweight World Champion and MotoGP legend Loris Capirossi demonstrated the bike to the fans with a parade lap around the Silverstone circuit.

From the start the pace of the weekend was as hot as the newly-laid tarmac, and the lap records fell in the very first session of the weekend. The field continued to get even quicker, and by the end of the weekend there was a new lap record, a new outright fastest lap and a new top speed record.

After a rare mistake from Alex Marquez, when he crashed out of the lead, the battle for the win was an intense one between Augusto Fernandez and Jorge Navarro, who on the Speed Up machine was fighting for what would have been his first win of the season, and indeed of his Moto2™ career.

Controlling much of the second half of the race from the front, he carried a slim advantage of 0.1seconds into the final lap. But a resurgent Fernandez, who slipped to 6th on the opening lap, proved just too strong.

It means that Marquez still leads the title chase, albeit with a reduced 35-point lead now, but Fernandez, Luthi and Navarro are on equal points sharing what is effectively joint second position in the championship.

Steve Sargent, Triumph’s Chief Product Officer, said: ““What a weekend it’s been for Triumph and for racing fans – stunning weather, fantastic racing, incredible pace with another clean sweep of lap and speed records. Congratulations to Augusto Fernandez and the Pons team for an exciting last lap victory. The championship is now very open with three riders on equal points behind leader Alex Marquez. In addition to the superb racing, Friday saw the global launch of our new Daytona Moto2 765 Limited Edition which Loris Capirossi rode on a parade lap on Sunday. There were also huge crowds to see Peter Hickman on the Triumph stand on Saturday – it’s been absolutely action-packed and a weekend that marks a significant milestone in this modern era of Triumph in motorsport!”

Next up for Moto2™ is the San Marino Grand Prix at Misano World Circuit Marco Simoncelli on 15 September. #PoweredByTriumph #TriumphOfficial 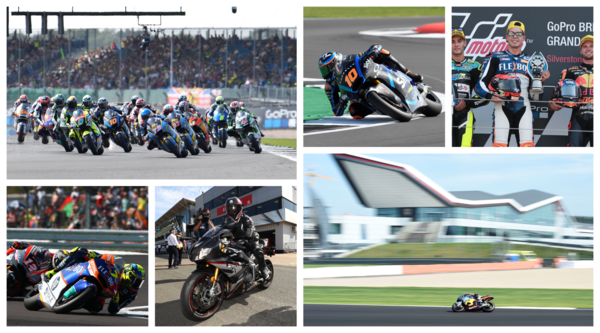