Lorenzo Baldassarri continued to stamp his authority on the Moto2™ class in 2019 with victory this weekend in Jerez, giving him three wins from four races this season. The championship leader set a new lap record in the process, 0.9 seconds faster than his own previous record from 2018.

He wasn’t the only rider setting records though, as Jorge Navarro took his Triumph-powered Speed Up machine to pole position with a new outright circuit lap record, almost 0.8 seconds faster than the previous best.

On the opening lap of the race, a four-bike crash on the exit of turn one caused a red flag and a restarted 15-lap sprint. A recovering Augusto Fernandez, who missed the last two races after surgery for a double wrist fracture sustained in a crash in Argentina, took the early lead ahead of his Flexbox HP40 teammate Baldassarri.

At middle-distance, Baldassarri took the race lead to secure another win, extending his championship lead to 17 points. Pole-sitter Navarro fought through the field having dropped to fifth on the first lap to take the fight to Fernandez, ultimately snatching second place with two laps to go, climbing to fourth in the championship.

Demonstrating the closeness of the field using the new Triumph engines, this weekend’s top speed was set with Navarro, Xavi Vierge and Alex Marquez all recording an identical 251.1 km/h.

Steve Sargent, Triumph’s Chief Product Officer, said: “After four races of our first season in Moto2, Lorenzo’s three wins is a great achievement especially given how close and competitive the series is proving to be this year. The fact that three riders set exactly the same top speed over the course of the weekend shows the level of fairness and parity that we strive for in our engine supply, and which is so important for good, close racing. With yet more lap and outright records being set this weekend the level is incredibly high, and we’re pleased that as Triumph we can play our part in making this show even more exciting.”

Next up, Moto2™ heads to the French Grand Prix at Le Mans on 19th May. 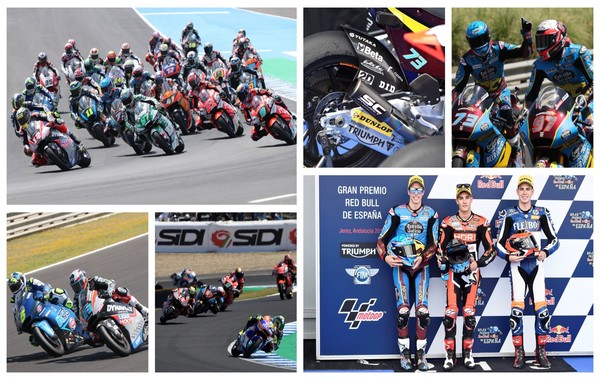