These new models retain all the brooding style and minimalist beauty of their predecessors, but add more performance, more capability and more attitude to give the rider maximum fun and maximum thrills.

The all new 1050cc triple engine that powers the new Speed Triple, incorporates 104 new developments resulting in an incredibly responsive, free-revving torque-rich power plant. With more torque across the entire rev range and an increase in peak power, the new engine allows the rider to capitalise on the Speed Triple’s incredibly agile chassis with instant response and incredible drive at any revs.

The new fuel delivery system ensures a superior fuel mix to increase combustion performance, while the new header design allows for a larger, denser catalyst with no loss of exhaust flow.

All of these changes have been made with a single aim in mind: to improve the rider experience through delivery of a livelier, more engaging and more involving ride.

The drivetrain also features a host of developments and features new gear linkages, new balancer gears with new geometry and a new slip assist clutch. In combination, these changes give the rider great shift feel with less lever effort when going through the gears.

Completing the new engine and drivetrain is a new exhaust system, with silencers that are 70.2% more free-flowing and 139g lighter on either side than the previous model. It works in conjunction with the new airbox to reduce emissions, ensure compliance with Euro legislation and importantly increase power. Additionally the new exhaust system amplifies the signature Speed Triple exhaust note – delivering a rich and resonant soundtrack to the ride.

Both new models feature a suite of rider-focused technology designed to maximise rider control and allow the rider to optimise performance to suit the conditions, climate and their riding style.

The choice of five different Rider Modes – Rain, Road, Sport, Track and a unique Rider-configurable mode – give the rider distinctly different pre-set combinations of throttle map, ABS and Traction Control settings. The rider configurable mode as its name suggests, allows the rider to individually set all of these performance parameters to suit their own style of riding. They all allow the rider to get the most out of their Speed Triple S or Speed Triple R ride in a wide variety of conditions.

When the Rider-configurable mode is selected the rider has the ability to select their preferred combination of throttle map, ABS and traction control settings. Traction control options are: Rain , Road, Track or Off. Three ABS settings are provided: Road, Track or Off. There are three throttle maps that can be selected to complete the performance personalisation – Rain, Road or Sport.

All of the five Rider Modes are monitored and controlled, along with the engine, through a new ECU, the same unit that is used in the race-winning Triumph Daytona 675.

In addition, the new Speed Triple has a gear position indicator as standard, completing the rider information system.

Similar focus has been applied to the chassis and suspension of the two new Speed Triple models, heightening the feel that the rider experiences during their ride.

In what can be described as a return to the ‘hooligan bike’ looks of the original Speed Triple and echoing the sporty styling of the Daytona 675 and Street Triple RX, the two new models are more focused and assertive in their styling.

They feature striking lines through the fuel tank and tail unit, creating a more hunkered down, aggressive look. Both have a 20mm narrower seat head, giving them improved stand-over and contributing to a lower profile and a more athletic, streamlined look.

The new Speed Triple S and Speed Triple R are instantly recognisable by the new DRL headlights, set low, and integrated with a new fly screen and distinctive intake duct. 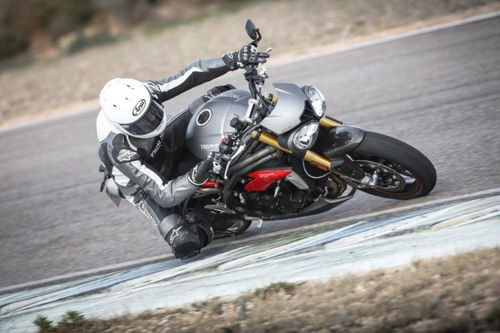