Alex Marquez took a decisive fourth victory of the season in Germany, after scoring his first Moto2™ pole position using Triumph 765cc power. It was a focused display from the EG 0,0 Marc VDS rider, who hit the front on lap seven after dropping to fifth, and then never looked back.

He led home a determined Brad Binder with his best finish of the season and Marcel Schrotter completied the podium. With Luthi only being able to manage fifth place after being handed a long lap penalty for coming together with Xavi Vierge, Marquez heads into the summer break just eight points ahead in the championship race. With just 39 points separating the top six riders, there is still all to play for in the second half of the season.

Meanwhile, the UK played host to the incredible Goodwood Festival of Speed event over the same weekend, and 2 x World Superbike champion James Toseland put on a great show aboard the Triumph 765cc Moto2 engine prototype bike to the delight of 200,000 fans.

Steve Sargent, Triumph’s Chief Product Officer, said: “We said at the start of the season we wanted to help make Moto2 racing close, fast and exciting. Reliving the first half of the season, I really think we have succeeded in this objective. We’ve had some spectacular racing with four different winners and nine different riders standing on the podium. Race and lap records have tumbled and it’s great to see that only 39 points separate the top six riders in the championship after nine races. And it was great to see James Toseland delighting fans at Goodwood on the Moto2 bike exactly a year after we world-debuted this project. Bring on the second part of the year!”

Next up for the Moto2™ series after the season break is the Grand Prix of the Czech Republic on 4 August. 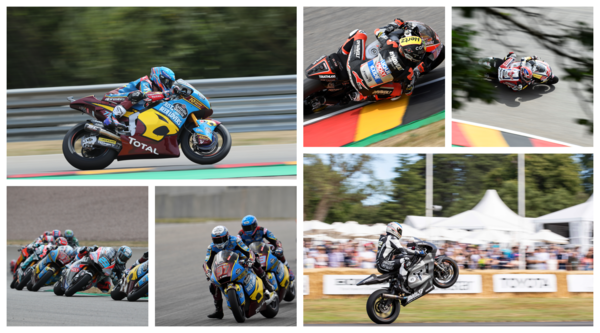