Thomas Luthi from Switzerland became the second Moto2™ Grand Prix winner of the Triumph-powered era at the Circuit of the Americas yesterday, after he and “Dynavolt Intact GP” teammate Marcel Schrotter dominated another incredibly hard fought and challenging Moto2™ race. Jorge Navarro also recorded his first ever Moto2™ podium finish to complete the podium.

Schrotter, who came into the weekend third in the championship, topped the timesheets in both Friday sessions just ahead of Luthi, and went fastest in Q2 to start the race from pole. Double-winner and championship leader Lorenzo Baldassarri could only manage 15th in qualifying amid the changeable conditions. The weather upset the rhythm of many when the FP3 session was cancelled due to rain forcing any Friday overnight changes to be put to the test in qualifying.

From the race start though, it was Alex Marquez riding for Marc VDS’s team who set the pace, jumping from second on the grid to a lead which lasted seven laps. On lap eight, the Dynavolt pairing proved too much and a fast-starting Luthi, who had jumped to second on the opening lap, took over the lead and never looked back.

Luthi’s win moves him into third in the championship, whilst Schrotter moves up to second overall, three points behind championship leader Baldassarri, who didn’t score after a crash on the opening lap. The top three riders are separated by just five points.

Idemitsu’s Somkiat Chantra recorded a Moto2™-best top speed of the weekend of 181.3mph during FP1, made all the more impressive when comparing the Triumph 765cc three-cylinder engine’s performance against the 1000cc four-cylinder MotoGP™ class engines and their event top speed of 215.5mph.

Indeed, there is much support of Triumph’s Moto2™ engines amongst the MotoGP™ elite. Marc Marquez commented over the weekend: “We can see they are around 300kph at the end of the straights. I think it will be better [than last year’s engines] because it’s closer to a MotoGP bike.” And Valentino Rossi echoed: “The engine has more torque; the bottom is a bit bigger. For me, it is at a very good level.”

Steve Sargent, Triumph’s Chief Product Officer, said: “It was another incredible weekend of racing, and I’m very pleased with performance at a track which brought its own unique challenges, including the longest straight of any circuit on the calendar and several points of heavy braking followed by hard acceleration in first gear. The weather made preparation hard with some of the teams missing FP3, but what we see is the championship fight getting tighter and new race winner under Triumph power – congratulations to Tom and the Dynavolt Intact team! It’s also very heartening to hear such glowing support from leading MotoGP riders of our engines and participation in Moto2™, especially that the power from our 765cc triple engine is helping make Moto2™ an even more relevant and exciting series.”

After three overseas races, Moto2™ heads to European next with the Red Bull Gran Premio de Espana at Jerez on 5th May. 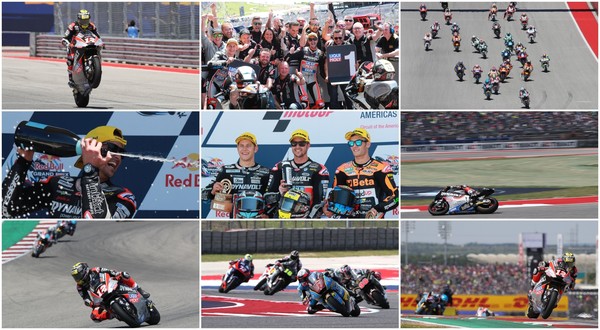