With a silhouette acknowledged as a design classic, the Triumph Bonneville is an undisputed motorcycle icon. For many it represents the essence of what a motorcycle should be, and is loved by riders of all ages and types around the world. Synonymous with British motorcycling the Bonneville has become a byword for style and character. It is, genuinely, a great British icon.

Today’s new generation stands as the perfect blend of that original character, British heritage, design and style, backed by a truly modern capability and performance.

On a bright September morning in 1956, Texan racer Johnny Allen, multiple land speed record-breaking racer, arrived at the Bonneville Salt Flats in Utah, USA, and lowered his slender frame into the cockpit of a streamlined, two-wheeled missile – The Texas Cee-Gar.

A union of American and British technology, with the star of Texas on its nose and Triumph name on its side, this aerodynamic land speed bullet was inspired by the fuel ‘drop tanks’ of a Mustang fighter plane. With power supplied by a methanol-burning 650cc Triumph Thunderbird parallel twin, as ridden by Brando in the Wild One, the cigar-shaped Triumph tore across the salt flats at an average of 214.7mph. Setting an outright world land speed record that Triumph would go on to hold for 14 years - thanks to the efforts the Dudek Streamliner in 62 and Gyronaut X1 in 66. Igniting controversy over the time recording used and authenticity of the claim and establishing Triumph as THE brand to choose.

Meanwhile in Britain, at the Triumph factory in Meriden, a new sporting flagship was in development - a direct evolution of a succession of high performance Triumph legends; from the 1939 Speed Twin through the sensational 1950 6T Thunderbird and the raucous Tiger T110 ‘Ton Ten’ of 1953.

The new bike, like its predecessor, was to be a 650cc parallel twin. Built to answer the American market demand for more power, more performance and more speed,
it targeted 120mph plus from a new twin carb set-up. The name for this new machine model was obvious. And so, in 1959, the first Triumph Bonneville was born.

The Bonneville T120 was showcased at the Earls Court Bike Show in 1958, and the first production machines were made available for sale to the general public the following year billed as offering “the highest performance from a standard production motorcycle”. Following a tweak to the design in 1960, it was a massive hit in both the UK and America, the T120 was essentially a high performance, twin carburettor version of Triumph’s T110 Tiger model. Thanks to it racing success, it spawned the Bonneville Thruxton that, in turn, inspired a generation of café racer machines.

The combination of extra performance with a fine-handling, lightweight chassis and beautiful design proved a winning format – which propelled the Bonneville on to become one of the most desirable and successful motorcycles of the time.

Racing legends
With the new class-leading Bonneville selected as the ‘weapon of choice’ for speed hungry racers, on race circuits and in the dirt, the road going ‘Bonnie’ became the basis of racing development for many of the sporting motorcycle categories of today – from scramblers to flat trackers to fairing-clad, full-on factory production racers.

Throughout the 1960s and into the 1970s, the power of the Bonneville’s design was showcased by an astounding number of world-beating victories in almost all of the classes of motorcycle competition.

AMA national half-mile dirt track races
With wins at Ascot by Gene Romero in 70 and Tom Rockwood in 1971,

With its astonishing versatility, the Bonneville was adapted and tuned to challenge in almost every racing environment, from the deserts of the
West Coast of California to the mountains of Eastern Europe.

The making of an icon

Much more than a racer though, during the halcyon days of motorcycling in the 1950s and 60s, the Triumph Bonneville established itself as the iconic bike of the era – a status that it retains to this day.

Motorcycling was at the height of its popularity, and the Bonneville achieved global cult status, with many a charismatic screen legend looking to be associated with this evocative machine, both on and off screen.

For many, 1968 was the finest hour for the Bonneville, with a series of progressive developments culminating in a model right at the peak of its evolution. The most significant of the changes was to the engine, which had notable carburetion, a smooth power delivery and great tractability at low speeds.

The 1968 edition is also considered a design highlight for the Bonneville; the tank badge was changed to a simpler ‘picture-frame’ design, and the rear shocks became mere exposed springs, which most young riders wanted. Even the colour scheme adopted was a fashionable Olympic Flame and White - lined in silver.

In the UK in the 1960s, the Triumph Bonneville became closely associated with Rock’n’Roll culture – with versions of the Bonneville being adopted by British Rockers as the ultimate café racer motorcycle.

London’s Rocker community found a home at the famous transport café, the Ace Café, which became the heart of motorcycling and Rock’n’Roll culture – and the Bonneville, or modified versions of it, would always be seen outside.

Arguably the most collectable of the 1960’s Bonneville line-up was the TT, a US market-only off-roader designed for desert, dirt and flat track racing. Light and fast, with race cams and higher compression, the 1966 ‘TT’ is considered one of the best looking, rarest and most desirable Bonnies around.

The Bonneville continued to make its mark in the 1970s and 80s, when special, limited edition bikes were launched to mark significant Royal occasions. In 1977, the T140J celebrated the Queen’s Silver Jubilee; and in 1981, the T140LE Royal Wedding Bonneville marked the marriage of Prince Charles and Diana, with 250 being produced.

The Bonneville in the 21st Century

The ’70s’ were a troubled time at Triumph, with discontent among the workforce following a government-sponsored merger with Norton Villiers.

In 1973, amid rumours that it was to be closed, workers took over the Meriden factory and a strike ensued. Virtually no bikes were produced over the following year and, in 1975, the workers formed the Meriden Motorcycle Co-operative.

Production resumed, and Bonneville T140s continued to be built into the early 1980s and were the last bikes to be built by Triumph before the Meriden factory closed in 1983. Even then, the ‘Bonnie’ refused to die. Small numbers were built under licence by LF Harris of Newton Abbot, Devon, between 1985 and 88.

Launching 6 new models in 1990 at the Cologne motorcycle show, built in a state
of the art factory in Hinckley Leicestershire, the modern era of Hinckley Triumph
was born.

The Bonneville looked as if it had been consigned to history, until in 2000 a new and authentically-styled model was unveiled. Blending original styling with contemporary manufacturing techniques and materials, the first ‘new’ Bonneville was produced with a 790cc parallel-twin motor. A centenary model followed the next year – the Bonneville T100 Centennial Edition - marking 100 years of the Triumph brand.

The early years of this century have seen the continued evolution of the Bonneville, including an increase in capacity to 865cc and the introduction of fuel injection (cleverly concealed to retain authentic Bonneville styling).

In the modern era, the Bonneville has again become the motorcycle in demand among celebrities, famous bikers and TV; from Tom Cruise to Gerard Butler – and the brand to be seen on in movies and TV; from Hollywood blockbusters like Jurassic World and London has Fallen to TV icons like Dr Who and Luther.

With the growing interest in modem classic motorcycles, a whole new generation of riders is choosing Bonneville – not only for that iconic Triumph heritage and unparalleled character, but also for its sheer beauty, accessible riding characteristics and ease of personalisation, driven in part by the growth of new wave custom scene, where the Bonneville has become one of the key bikes of choice for professional customisers and garage builders alike.

Today, with the launch of the next generation of Bonnevilles, all with more capability, more beauty and performance, Triumph are committed to maintaining the original spirt of the iconic Bonneville and its place as THE modern classic in the
motorcycling world. 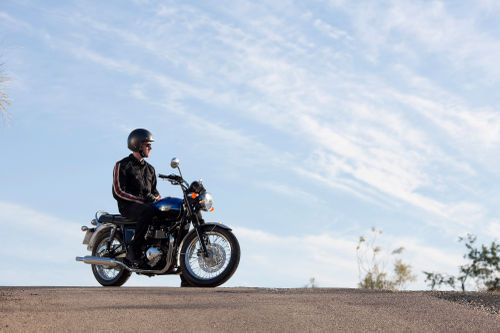