James Toseland became the man to beat in high level motorcycle racing from the early 2000s having completed 5 consecutive years of the World Superbike Championship, finishing in the top 4 positions between 2003 and 2007.

James’s determination really paid off, becoming a 2 time World Superbike Championship winner in 2004 and 2007, riding for different manufacturers. He also completed two years of racing in MotoGPTM, the premier class of the sport, during 2008 and 2009. An injury forced James’s early racing retirement in 2011, however Triumph Motorcycles recently coaxed James back into riding a race bike for the first time in 7 years. James took to the Silverstone track in August 2018, the spiritual home of British Motorsport, aboard the Triumph Moto2TM engine prototype bike during poor weather conditions, but this was enough to hook him back into riding again, if only for fun!

James is a multi-faceted individual; as an experienced presenter, he is currently retained by BT Sport as a commentator in the MotoGPTM, Moto2TM and Moto3TM series. James has also utilised his experience to mentor and develop many young riders coming into the sport. James’s other clear passion is music and alongside his multi-award winning wife Katie Melua, James himself is an accomplished musician and his band “Toseland” tour extensively.

James Toseland joins the line-up of high profile Triumph Motorcycle ambassadors at a key moment of growth and success for the brand, illustrated best by the return to the top tier of motorcycle racing for 2019. James will be commentating on the entire 2019 Moto2TM season, which will be exclusively powered by Triumph 765cc triple engines (a development of the class-leading Street Triple RS powerplant) in addition to attending key Triumph events, promoting and showcasing the brand to a growing audience of Triumph fans young and old across the world.

Celebrating the partnership with an explosive entrance!

To celebrate the new partnership, Triumph have agreed two initial high profile activities for James; firstly for him to ride the Moto2TM engine prototype motorcycle onto stage in front of the World’s media at EICMA show in Milan, Italy during the Triumph Press Conference on 6th November and secondly for James to perform a Triumph-mounted parade lap in front of 200,000 adoring race fans during the final motorcycle Grand Prix of the season at Valencia on Sunday 18th November 2018. James’s parade lap on race day is scheduled in between the Moto2TM and Moto3TM races within the racing programme.

James Toseland said of his partnership with Triumph;

“I am delighted to have partnered with Triumph Motorcycles at this pivotal time in their history. There is some nice symmetry to the fact that they are returning to high level, factory supported racing, and have simultaneously facilitated a golden opportunity for me to enjoying riding again for the first time in many years. I am very excited to start promoting this iconic British brand around the world next year.” 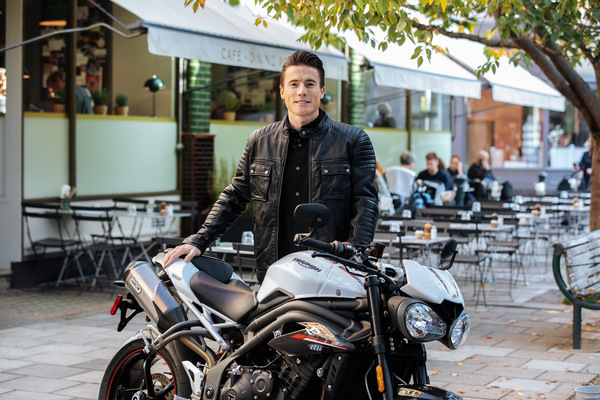