Brad Binder took a fantastic third victory of the season at Phillip Island on Sunday in dominant fashion, leaping into the lead from second on the grid and never looking back. Red Bull KTM Ajo teammate Jorge Martin also has a fantastic race to make it a team one-two, as he surged from fifth to second on the opening lap and followed Binder home to record his second podium finish of the season.

Behind them, and the man on the move at this point in the championship race, was Tom Luthi. The Dynavolt Intact GP rider only started tenth after a weather-affected qualifying session but battled through the pack to finish third, taking his sixth podium of the season and moving to within 28 points of series leader Alex Marquez who could only finish eighth.

Luthi has closed the gap to Marquez by 18 points in the last two races, and with 50 points remaining from the final two races, the title race is very much on. At a time in the season when both the MotoGP™ and Moto3™ titles chases have been decided already, mathematically the top four riders still have a chance of taking the crown, proving just how close the Moto2™ series is this year with Triumph power.

It was Stefano Manzi who was the fastest man of the weekend however, in terms of top speed. On Sunday morning’s warm-up session the Italian set a new Moto2™ outright top speed record of 301.8km/h. Three riders all bettered the 300km/h mark.

Steve Sargent, Triumph’s Chief Product Officer, said: “If we thought the championship was close before, it’s really intensifying now! Whilst the MotoGP and Moto3 titles are decided, the top four Moto2 riders are all in with a mathematical chance of winning the title which shows just how close the class is. Can Alex find his mid-season form and end on a high to defend his lead? Can Tom continue chipping away and do enough over the final two races to steal the crown? With two wins and a second place from the last four races can Brad sneak up on the lead in the closing stages? One thing’s for sure – the first season of Moto2 powered by Triumph will go down to the wire at the last race! I’m also very satisfied to see the Moto2 top speed record broken again at an incredible 301.8km/h. Our first season has been exactly what we set out hoping it would be, and even exceeded our expectations.”

Next up for the Moto2™ category is the Malaysian Grand Prix next weekend, 1-3 November, as the final in the back-to-back triple of Japan, Australia and Malaysia. 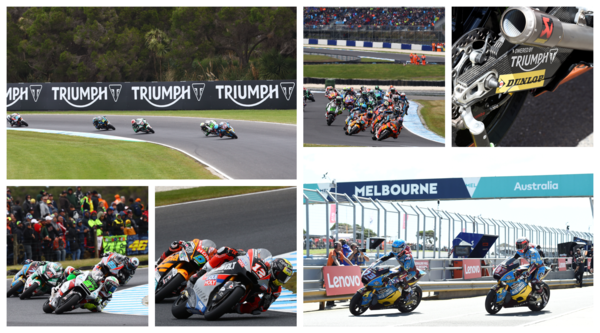