Luca Marini takes his first Moto2™ victory under Triumph power, and sets a new lap record in the process

Sky Racing Team VR46’s Luca Marini took his first victory in the Moto2™ era powered by Triumph this weekend, and his second career victory, with a dominant performance amid sweltering conditions at the Chang International Circuit in Thailand.

Championship leader Alex Marquez riding for the EG 0.0 Marc VDS team, started on pole, and converted his outright lap record-setting qualifying performance into a strong race lead for the opening two laps until Marini, who started fourth, put him under pressure and made his move for the front. Once clear at the head of the field, the Italian didn’t look back and took a decisive win, making him the sixth different victor of 2019.

As the rain stayed away, the temperature reached 33 degrees Celsius and the battle for the remaining podium places was just as hot. As Alex came under further pressure, the battle for second became a four-way fight. American Racing’s Iker Lecuona had a very impressive ride to come from tenth to second by lap 14, and it was only on the final lap that he lost that position to Red Bull KTM Ajo’s Brad Binder, who started even further down the order in 12th. Still, it was Lecuona’s first podium of the Triumph Moto2™ era.

In the second year of Moto2™ visiting the Buriram circuit, for the eighth time this season a clean sweep of records fell to the power of the Triumph 765cc triple – the outright circuit best, set in qualifying; the lap record, and the top speed at 281.9km/h. Remarkably, further demonstrating the closeness of competition this year, four riders all recorded exactly the same top speed: Sky Racing Team VR46 pairing Nicolo Bulega and Luca Marini, ONEXOX TKKR SAG Team’s Remy Gardner, and Italtrans Racing Team’s Andrea Locatelli.

Steve Sargent, Triumph’s Chief Product Officer, said: “It's fantastic to have a new Moto2 winner using Triumph power, so our congratulations to Luca and the Sky Racing VR46 team! We also welcome a new rider to the podium for the first time, so more congratulations to Iker and American Racing - joining Brad on his 6th trip to the podium, it's great to see the closeness of the class rewarding more riders. And of course it's satisfying to continue the clean sweep of records this season, with outright, lap and top speed records at this track all falling to our 765cc Triumph triple. Thailand is an important region for Triumph and many of our staff attended the race. They were given another fine display of racers pushing the boundaries and beating records.”

After the heat of Thailand, the Moto2™ series has one week off before the longest single run of races of the season – a back-to-back triple of Japan, Australia and Malaysia, starting on 18-20 October. 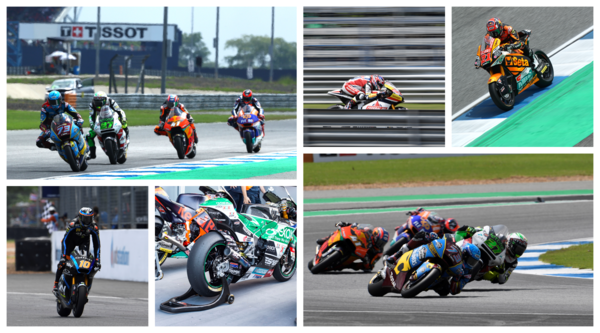