The second round of the 2019 Moto2™ Championship in Argentina was another thrilling race with yet more lap records falling to Triumph 765cc power, this time at the Termas de Rio Hondo circuit, following the clean sweep of lap and race records set at the inaugural round in Qatar, three weeks ago.

In the qualifying session the times were incredibly close with the top four inside the all-time lap record set by Johann Zarco in 2015, and the top 22 separated by less than a second. That pace carried into Sunday’s race, where remarkably the top 19 finishers were all faster than last year’s race-winning time in similar dry conditions:

Qatar-winner and championship leader Lorenzo Baldassarri started from the third grid row in eighth position but wasted no time in fighting through the field, rising to fourth on the opening lap.

Such was the closeness of the pack though, it was lap 19 before he could finally make his way past Remy Gardner (who set the fastest race lap) for the lead. Gardner led for 14 of the 23 laps with Marcel Schrotter also taking his turn at leading five laps, but it was Baldassarri who came to the fore to lead the final four laps to take the flag and extend his championship lead.

Steve Sargent, Triumph’s Chief Product Officer, said: “We couldn’t have asked for more from the opening two rounds of Triumph’s first season powering Moto2™ – again this weekend we saw some incredibly close racing and remarkable performances to set new circuit records in Argentina as well as Qatar. We’re very proud of the performance of our engines, and the fact that the top 19 were all faster than last year’s race-winning time in Argentina demonstrates how much more useable power our 765cc engines offer the riders this year.”

Watch out for more thrilling, hard-fought action at the Grand Prix of the Americas, as Moto2™ moves to the Texas, USA. Race day is Sunday 14th April. 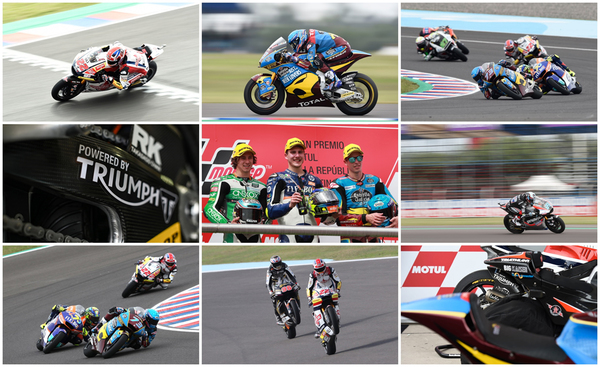