Augusto Fernandez took victory in Assen yesterday after a hugely exciting and drama-filled race in which championship hopefuls and previous series leaders Alex Marquez and Lorenzo Baldassarri both went down. Flexbox HP40 rider Fernandez has now taken podiums at three of the last five races, including his first win in Assen, to move to third in the championship.

In doing so, he also set another new lap record on his Triumph powered Kalex machine, continuing the clean sweep of lap and/or race records broken at every round of the 2019 Moto2 World Championship with Triumph’s 765cc triple.

Remy Gardner took his first pole position in qualifying and became the first Australian to do so in the intermediate category since Casey Stoner in 2005 at Phillip Island. He took his turn at leading the race, as did Sam Lowes, until both crashed out in separate circumstances.

It was Brad Binder who led for most of the race, until six laps from the end when a resurgent Marquez, who had dropped to 6th position in the opening laps, hit the front again and in typical fashion looked all set to run away with his fourth win in a row having really connected to the power and torque of the Triumph 765cc triple.

That wasn’t to be however, as Baldassarri, who himself was also riding a fantastic recovery having started 16th, lunged up the inside of Marquez as he looked to run a little wide and lost the front taking both championship contenders out of the race.

That paved the way for Fernandez, Binder and Luca Marini to move onto the podium, whilst a fourth place for Thomas Luthi moves the Swiss rider into a narrow lead at the top of the 2019 Moto2 championship, just 6 points ahead of Marquez. Marini is the highest-placed rider to have scored points at every race, lying in sixth position.

Steve Sargent, Triumph’s Chief Product Officer, said: “Well, what a race!! Incidents and overtakes came thick and fast in the Assen Moto2 round with Augusto Fernandez managing to navigate his way through it all to complete his maiden Moto2 win and Brad Binder getting his first podium finish in second. Fernandez is certainly a man on form having taken pole position in Spain and we have now had four different race winners so far this season.

As the season progresses and more riders dial themselves into the power and torque of the Triumph engine I am sure we will see more new faces at the front. After eight races we continue to see lap records being broken with a new race lap record in Assen. I’m very pleased to see that across the range of tracks and conditions we’ve experienced so far this season, our engines have helped redefine performance milestones at every race.

Next up for the Moto2 series is the second in a back-to-back pairing of races at Sachsenring for the German Grand Prix on 7 July. 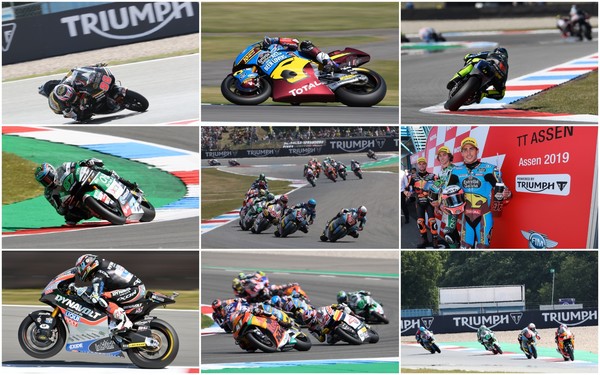