The 2019 Moto2™ World Championship powered by Triumph has proved an incredible success, and that continued in the Valencia season finale with another clean sweep of circuit records as the 765cc triple has redefined the class this season.

After Jorge Martin took an early race lead, his Red Bull KTM Ajo teammate Brad Binder assumed charge in a tense battle with Dynavolt Intact GP’s Thomas Luthi. The pair were fighting tooth-and-nail for the race win, and also for second position in the World Championship. Each taking turns at the front, it was ultimately Binder who eked out a margin and took his fifth victory of the season, equal best with recently-crowned World Champion Álex Márquez of EG 0,0 Marc VDS.

In an incredibly closely-fought season, nearly half of the grid have qualified on the front row over the 19 races and there have been six winners and 13 different podium-finishers.

The records continued to fall in Valencia too, with the tenth clean-sweep of lap record, outright circuit best and top speed. It means a total of 14 new lap records, 12 outright circuit best laps, and 18 top speeds have been set in 2019, including 301.8km/h in Australia. A new record has been set using Triumph power at 16 of the 19 races this year – two of the remaining three were rain-interrupted and Misano had been resurfaced and was markedly less grippy than previously.

After more than 300,000 km of running, Marquez took his first Moto2™ world crown, three points ahead of Binder who was just nine points ahead of Luthi. Those results achieved from a maximum haul of 475 championship points. Flexbox HP40 took the Team crown by just four points, and Fabio di Giannantonio was crowned Rookie of the Year in Valencia.

Steve Sargent, Triumph’s Chief Product Officer, said: “Our first season has gone so fast since the opening round in Qatar, and we are delighted with the way everything has evolved – from the closeness of racing and the number of different riders on the podium to the reliability and outright performance with so many records falling to our 765cc triple power. It’s been an incredible season and one we are very proud of. Congratulations again to Alex Marquez and team VDS for his incredible championship win, and to Sito Pon’s Flexbox HP40 team for finishing top in the team standings in 2019.  It was also a joy for fans to see just how closely fought second place in the championship was, with Brad Binder finally securing this accolade just 2 laps from the close of the entire season!
We’d like to add our huge thanks to all the teams and riders for their role in making Moto2 this year so exciting. We’re already looking forward to 2020!” 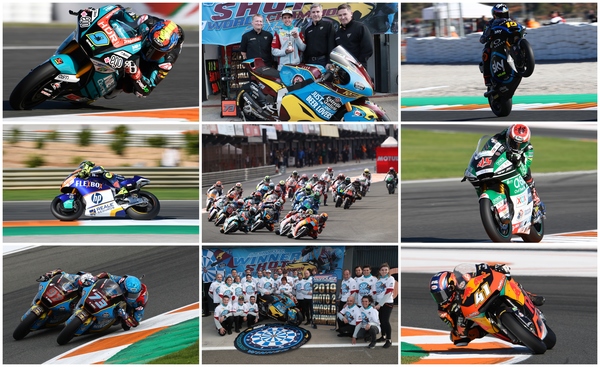