A clean sweep of records powered by Triumph in Mugello, including the first ever 300km/h top speed in Moto2™

It was Alex Marquez who secured his second 2019 victory in a row at the Italian Grand Prix in dominant style.

It is the first time the Spaniard has scored back-to-back victories in five years, since he won the Moto3™ World Championship in 2014. But that was only half the story, as once again Triumph 765cc triple engines powered the Moto2™ field to a clean sweep of new records.

The first stand out moment of the weekend was Sky Racing Team VR46’s Nicolo Bulega, who in free practice 2 became the first rider to achieve 300km/h (187 mph) on a Moto2™ machine. From the 765cc triple, that’s more than 100km/h per cylinder, and the fastest the category has ever seen.

Then in qualifying, as the ground temperature rose to 45 degrees Celsius, it was Marcel Schrotter’s turn to shine as the Dynavolt Intact GP rider set an all-time lap record. Beating the previous lap record by almost one second, the top six riders in qualifying were all faster than the existing outright record which dated back to 2015.

Then in the race, a new lap record was set by Marquez on his way to a victory which boosts him to second in the championship, just two points behind leader Lorenzo Baldassarri. The Flexbox HP40 rider could only manage 15th position in qualifying and was on the back foot coming into the race, but a blistering start saw him gain five places on the opening lap and his relentless pace saw him on the tail of the podium battle with three laps remaining to save his title lead.

After six races, the top three in the title chase are separated by just four points, so as well as Moto2™ having never been so fast, it’s also never been so close.

Steve Sargent, Triumph’s Chief Product Officer, said: “Achieving over 300k/h is a real milestone and something we’re very proud of, really demonstrating the power of our 765cc triple. It’s also wonderful to see riders with the front wheel in the air still at over 250km/h! Mugello has been another very good weekend for the performance of our engine as it continues to redefine the speed and the performance of the Moto2 category, and continues to break records almost every weekend.”

Next up in the June trio of races is the Grand Prix of Catalunya, where the sport celebrates 70 years of Grand Prix racing and Triumph will power Moto2™ around the Barcelona circuit on 16th June. 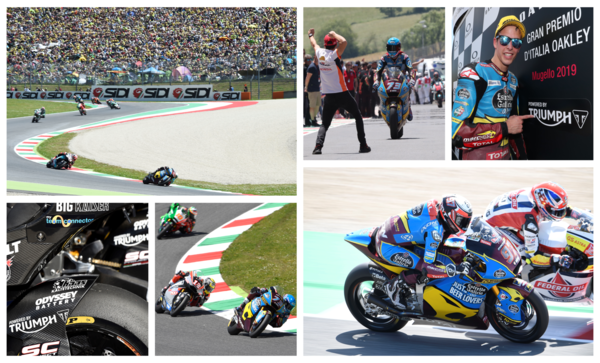